Superantigen is the strongest immune cell activator that has been already found in the world at present. It’s a kind of protein with complicated source. During the process of immune response, it can activate immune cells, such as T cell , NK cell, LAK cell  at the speed of 2,000-50,000 times in pinpoint quantity (count with ng ), and make it split hyperplasia in a large amount, produce interleukin, interferon, tumor cell necrosis and other cytokines at the same time, and concentrate on acting on the tumor cell, make it dissolve, wither and die quickly.

Xiehe Group’s research and application of superantigen is taking the leading position in the world, we developed the world’s first superantigen based anti-cancer bio-preparation ---- Xiehe Protein Oral Liquid, this is also the newest achievement of bio anti cancer in the world. The anticancer theory of its "quaternity” has already got the abundant verification in experiment and clinical experiment.

Superantigens differ from conventional antigens in several ways. Conventional antigens are taken up or are endogenously produced by antigen-presenting cells and are processed into discrete peptides, which are then presented to antigen-specific T cells in the antigen-binding groove of either MHC class I or class II molecules on the surface ofthe antigen-presenting cell. Superantigens, on the other hand, function as intact molecules and bind directly to MHC class II molecules on the surface of antigen-presenting cells in the absence of processing. Superantigens can be presented to T cells by many types of immunologic class II-bearing cells, including monocytes/ macrophages, B cells, and natural killer cells (24), and binding to class II occurs at a site outside the antigen-binding groove. This complex of superantigen/MHC class II interacts directly with the variable region of the beta chain of the T-cell receptor (TCR) on T cells, thereby causing T-cell activation. 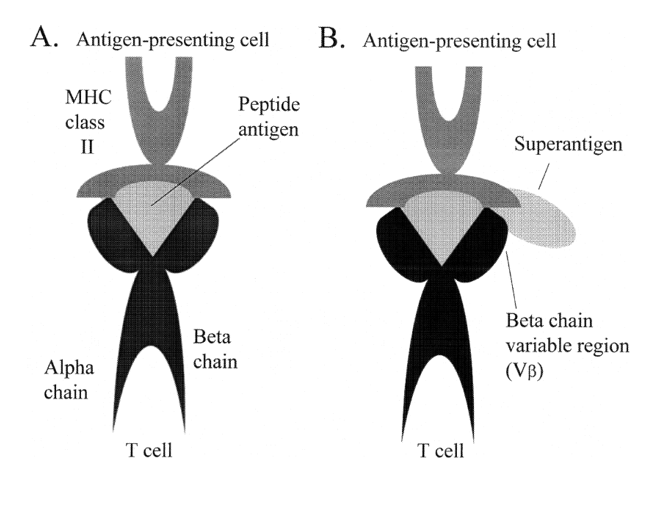